There are three different segments of historic breeding lines in the Mangalarga Marchador  breed.

I.     Old ones or Foundation lines -- These are lines that started during the XVIIIth century in the South of Minas Gerais state, mainly at Cruzilia region.

II. Traditional lines, which were born from the foundation lines 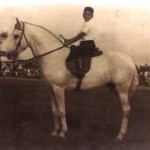 Favacho -- The starting point is the Favacho, whose chapel was erected at 1761 near the farm house and still is there.    João Francisco Junqueira Filho and his son José Frausino Junqueira (born in 1805) are considered the first milestones of this breeding masterpiece.   Favacho horses are excellent on Marcha Batida (more diagonal movements), but their morphology is not refined although very expressive.  They remind us of the old Sorraia and Alter Real stallions of the XVIIIth century.  Most frequent colors: dun, chestnut, bay, and grey. Historical horses: Plutão, Canadá, Duque, Calçado, Manco, Trovão, Montenegro, Fla-Flu, Jambo, Gesso, Calçado, Albatroz, Armistício and Candidato.  More recently: Farol, Radical, Quociente and Estanho.

Campo Alegre -- This is the bloodline founded by Mr. Gabriel Francisco Junqueira, the Baron of Alfenas, considered founder of the MM breed in 1812.   Today this genetic pool is extinguished, but several of his descendents started new farms in Minas Gerais state, including his son Francisco Gabriel Junqueira (nickname ´Chiquinho do Cafundó’), great-grandfather of Tabatinga´s breeders.

Traituba-- The farmhouse was built in 1831 to receive Dom Pedro I, Emperor of Brazil, who never confirmed this invitation. José Frausino Fortes Junqueira, born at the near Favacho farm founded the bloodline. The horses born at Traituba are quite similar to Favacho, but a more refined neck and head. Most frequent colors: chestnut, bay, grey and dun. Influential stallions: Pégaso, Canário, Glicério, Armistício, Rádio, Rádio II, Bibelô, Beduíno, Candidato, Sátiro, Aviso.

Narciso  -- This farm belonged to one of Baron of Alfenas sons: Mr. Antonio Gabriel Junqueira.  The bloodline was extinguished during the XXth century, but the farm and the house are still there at Cruzilia (MG).  The present-day herd doesn’t present the same foundation genes.   Most of all farms near Cruzilia region were benefited from Narciso´s stallions, like: Abismo, Trovador, Pretinho.  Abismo is considered the old father of all MM actual herds, in order to be the foundation tree of breed-chiefs like Bellini JB and Angahy Caxias I.   Narciso´s horses were excellent on Marcha Batida and presented good refinement. 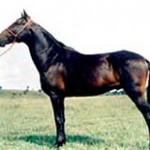 Angahy (Aan guy ee)-- The farm is located between Campo Lindo and Favacho land, and the founder was Mr. Christiano dos Reis Meirelles, who died in 1944.  The herd shows a nice gait in Marcha Batida, good bones and a not very well refined head.  This bloodline is considered an example of good foundation mares with significant historic stallions in terms of MM evolution.  Most frequent colors are chestnut, bay and grey. Most influential  stallions: Caxias I and II, Bônus I and II, Mozart, Mineiro, Miron, son of Traituba Sátiro, largely used at Angahy, plus Salmon, Veto and Yankee.  (Now written as Angai, but pronounced the same)

Engenho de Serra – It started with Mr. Severino Eugênio de Andrade during the second half of XIXth century.  Excellent animals in gait and morphology.  Now extinguished. Historic stallions: Baluarte, Bismark, Seta Caxias, Torpedo. Seta Caxias, born as Abismo do Engenho de Serra, was the sire of Herdade Cadillac and many other Herdade greats. 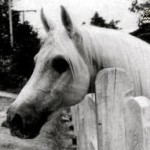 Abaiba (Abba eeba)-- This line started with Mr. Erico Ribeiro Junqueira at Leopoldina city  (MG). It is the bloodline that typifies elegance and beauty especially in the head and neck. They often resemble Arabian horses in their look.  Pure Abaiba is not always known for their gait; in fact, they have a very poor comfortable Marcha Batida.  They are great endurance horses. Most frequent colors: grey 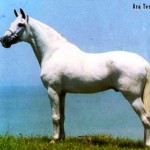 Ara -- It began with Mr. José Ferreira Leite and overseen by his son Francisco Walder Ferreira. Located between Favacho and Traituba farms.  They have a refined expression, excellent gait Marcha Batida, medium to short size. Most frequent colors are bay and grey. 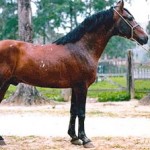 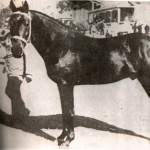 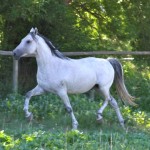 Tabatinga -- The farm began with Mr. Severino Junqueira de Andrade, who brought from his father’s farm at South of Minas Gerais old mares with blood from Baron of Alfenas´ herd.  The typical horse breed at Tabatinga farms is strong with solid bones, refined head and good on gallop and working with cattle, but its Marcha Batida gait can be poor. Most frequent colors: bay, dun and grey.

53 -- It started with Mr. José Frauzino Fortes Junqueira (nicknamed ´Zezé do Agudo´) in 1902, at Morro Agudo city, São Paulo state. He got married to a daughter of Mr. João Braúlio Fortes Junqueira (Campo Lindo – JB) and moved to São Paulo state in search of new areas to plant and harvest.  He also took a group of mares with him from JB line.  ‘53’ was the number of his wife at the high school. Good gaits Marcha Batida with strong cow sense.   He bred both Mangalarga (mixed with Thoroughbred, Saddlebred, Hackney) and Mangalarga Marchador horses.  Some of this line can be hotter than traditional MMs. Most frequent colors: chestnut, bay and black.

Today in Brazil, there has been a resurgence in demand for the foundation bloodlines, still breeding after centuries. JB and Favacho are two of the leaders, in terms of ranking of top stallions, market pricing and stallions being used in MM breeding programs.  In Brazil, the top stallions are usually owned by a condominium of breeders with each breeder paying hundreds of thousands of dollars for their share of the horse.

Many Marchador breeders chose to follow the bloodlines of the historic breeders.  So, even though the farm name is different, the breeding results are similar to the original lines.   The entire list would be too long to print here, but here are some examples:

It is important to note, that even in staying pure to the bloodline, these line breeders will occasionally bring in new blood to strengthen their program. 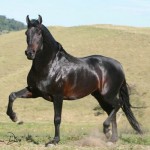 In Brazil, it is popular today to blend the bloodlines to achieve the individual breeder's objectives.  With 30,000 breeders there, the combinations are staggering.  At the National Competition, there are often new breeders in the winner's circle every year, so it must be working! 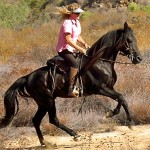 In our short history, we have already had lines that are extinguished; some MM breeders have already retired.   It is not our culture to pass this on from generation to generation as in Brazil.   Listed below are the names of breeders active in breeding in 2010.  They are creating our foundation bloodlines and legacy.