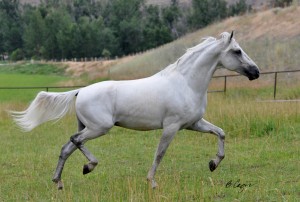 The Mangalarga Marchador averages between 14.2 and 16 hands in height and weighs between 850 and 1100 lbs. Although grays predominate, chestnut, black, bay, buckskin, palomino and paint horses are also present.  An adept and extremely versatile breed, the Mangalarga Marchador is fast becoming one of the most sought after breeds.  As with many Iberian breeds they are good cattle horses. They are known for setting the Guinness Book of World Records endurance ride of 8,694 miles in 1994.  A perfect trail horse, they could also excel in other disciplines that require agility, stamina, speed and a sound mind.

Training of this breed is facilitated by its intelligence, and uses for the breed are unlimited. In work with cattle, in sports, in Brazilian functional trials, or in cross-country horsemanship, the Marchador is outstanding and is obtaining excellent results in comparison to other breeds. This breed is extremely docile and is commonly mounted by children.

The most popular and widespread horse in Brazil is the Mangalarga Marchador, which developed in 1740. Joao Francisco of Portugal settled in Brazil at the hacienda Campo Alegre, where the Marchador horses began to emerge. Francisco adopted the surname Junqueira to designate his native city. One of his twelve children, Gabriel Francisco Junqueira, the Baron of Alfenas, is credited with the expansion and development of the breed. His friend, Dom Pedro I (1798-1834), Emperor of Brazil and son of Joao IV of Portugal, gave him an Alter Real stallion named Sublime.

The stallion Sublime was the descendant of two horses brought from the breeding farm Coudelaria Alter do Chao in Portugal by Dom Joao VI during the invasion of the Iberian Peninsula by Napoleonic troops. In Brazil, Sublime was crossed with mares of the hacienda Campo Alegre: Spanish Jennets and Andalusians. Most of the Spanish horses used at the hacienda in launching the breed were the famous Spanish Jennet, known to be a fast, smooth ambler. The offspring of Sublime produced horses with the characteristics of the present-day Mangalarga Marchador horse: docility and smooth gaits, with a cadenced rhythmic gait called the marcha.

The Mangalarga Marchador is a beautiful horse, exhibiting classic Spanish conformation and charm. The gait is remarkably fast and smooth, a gait in which the horse moves its feet alternately laterally and diagonally with moments in which triple support can be verified. 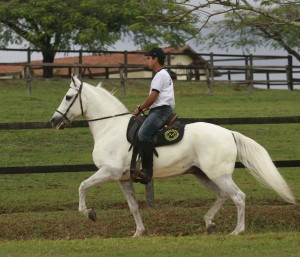 If the horse is marching on level ground at a normal rhythm, the tracks of the two hind feet will cover or pass slightly beyond the tracks of the front feet. When the horse places the feet diagonally most often and with moments of triple support, the gait is called marcha batida (ba-chee-da). If the horse moves the feet more often laterally and separately and also has moments of triple support, it is called marcha picada (like the sauce). 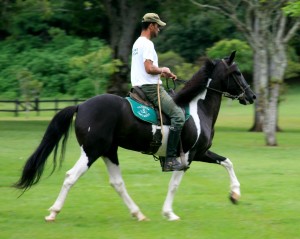 The reason for so much preoccupation with the marcha, indicated by the name of the breed is that this gait in unique in the world. The famous Spanish Jennets have died out, and the Marchador is probably the purest surviving remnant of that breed. No other breeds have been crossed into the Mangalarga Marchador. Due to the triple support exhibited in the Mangalarga Marchador, the marcha gives a very comfortable ride with little friction. The Mangalarga Marchador neither trots nor paces, naturally going from the smooth marching gait into a wonderful canter. 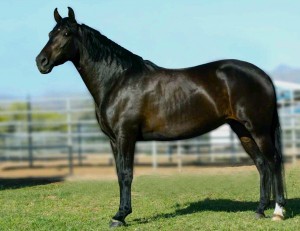 Bossa Nova de Miami. "de Miami" was chosen by the first breeders in the U.S., the Guerra family.

In keeping with their long heritage, the names of the Marchadors tell a story reflecting their roots. Mangalarga Marchadors always have compound names that include the breeding farm. The horse’s full name and bloodline names tell you the origin of your horse and his heritage.

One of the names is like a first name to the horse, but the other name is like a surname so the combination is unique in the breed. The “surname” is the breeding farm. So if your farm name was Darley LTD, the farm designates its offspring in one of the following ways:

Once a methodology is chosen for a farm, all of its progeny are named uniquely in this fashion.

Originally, there were only a few founding farms in Brazil. These farm names resonate in the pedigree of every Mangalarga Marchador.  Some are still in existence today.    Historic farm names like Abaiba, Angahay, Bela Cruz, Caxambu, Favacho, Herdade, J.B., Passa Tempo, Tabatinga and Traituba  represent some of the bloodlines here in North America. 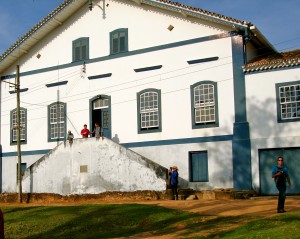