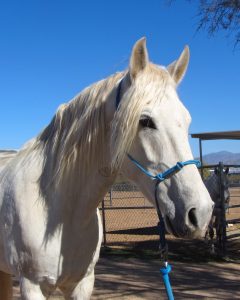 Howard Bonis, the first Marchador owner in Maine recently passed away late January, 2017   When Howard could no longer take care of his beloved horse, a great home was found with Cyndy Falvey, only a few minutes away on the Maine coastline.   Cyndy is a long-time horse owner and has another older Thoroughbred on her property.  Cyndy also took Chama’s companion, the goat (named Goaty)!    The two animals are inseparable and when Cyndy trail rides, often the goat comes along!   As a tribute to Howard, Cyndy has given a generous donation to the USMMA in Howard’s memory.     Thank you Cyndy!

You can read some of Howard’s obituary here and gain a sense of what kind of person he was!  I met Howard when he contacted me to purchase a Summerwind Future Foal.  Already in his late 60’s, he guaranteed me that he would be a great home with no problems training horses from a young age.   He proceeded to tell me many, if not all, of the stories about the horses in his life, including a Morgan stallion that he loved for many years.   He had acreage in Maine so he set out to build a horse barn and hay storage on the property.   He put a paddock up on the crest of a hill with plenty of trees for shade and shelter.   All for his future horse.

Howard was convinced that his Marchador would be enjoyed by the whole family including his grandchildren.   He also wanted to use the horse as a therapy horse with autistic children.  Before his foal was born, an older, trained Marchador became available that I thought might be a good fit for Howard and perhaps better than waiting for a foal to grow up.    Howard agreed.   Chama was off to Maine!   Chama was loved by the family.   He was well-cared for by Howard who got to relive all of the warmth and enjoyment about grooming, feeding, and riding again.  After Howard’s death, his family wrote and told me how much they  thought having Chama prolonged Howard’s life.

I drove to meet Howard and his wife Susan after a Kelley family wedding in New Hampshire.   It was a memory I will always treasure.  Little did I know then, that it would be soon after, he would need to give up his Marchador.   After Chama moved on to Cyndy, we were fortunate enough to meet her.   Cyndy often comes out west in the winters so we met during Barrett-Jackson week.   A horse couldn’t be more lucky to have these two owners in Maine!

Howard L. Bonis Jr., 72, of Arrowsic, died Monday, Jan. 23, 2017. Howard died peacefully with his wife by his side and surrounded by his children.

Howard was born on March 5, 1944, in Norwalk, Conn., to Howard L. Bonis Sr. and Mary Castango Bonis. He grew up in Norwalk, Conn. He was a member of the first graduating class of Brien McMahon High School in 1962. After high school, Howard attended Norwalk Community College, before enlisting  in

His bravery during the Vietnam War earned him a Purple Heart and Bronze Star With Valor. While in Vietnam, he served as a fire team leader with the Company F, Second Battalion, Fourth Marines. He was medically retired from the United States Marine Corps.

Howard married Susan Walker Bonis on Sept. 9, 1967. Howard met Navy Corpsman Susan Walker at St. Albans Naval Hospital on Long Island, N.Y., while he was recovering from injuries sustained on the battlefield. He went on to graduate from American International College with a degree in political science, and later earned his master's degree in special education from Salem State University.

The most rewarding years of his professional career were spent as an educator in both public and private schools.

A celebration of his life will take place in Maine in the summer of 2017. He will be privately interred at Arlington National Cemetery. We ask you to celebrate Howard by having a root beer float, eating an éclair, or dancing with someone you love.

Chama  was born and bred at Haras Lucero, TN, the breeding farm of Bill and Sandy Kambic, long-time members of the USMMA.   He is the son of Desafio de Miami x Apple Pie de Miami, both bred by the Guerra family of Florida, the first importers of Marchador horses to the U.S. 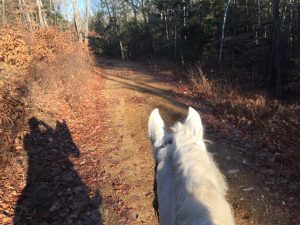 At a young age, he was sold and shipped to California to Jake Martinez and Theresa Longo at Rancho de los Cielos.   They were relatively new breeders and wanted to have some Marchadors to sell as they started their breeding program.   Chama moved from there to Oregon, where he was trained and competed successfully in mounted archery at Cascade Mounted Archery with Holm and Susan Neumann.

Being a horse “anyone could ride”, Chama moved south again to AZ to Sandy Hull.  When Chama didn’t work for her, Sandy moved on to another Marchador and Chama left here bound for Maine!   His forever home with 2 wonderful owners - Howard Bonis and now Cyndy Falvey!