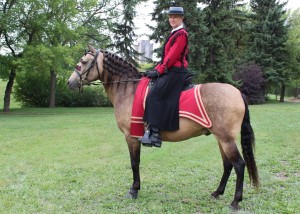 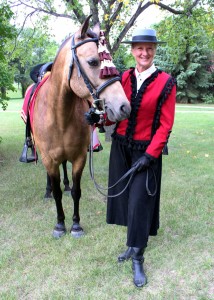 “Every August, Saskatoon Saskatchewan, .Canada hosts a fairly large parade through downtown. I have participated for many years.

Last year I assembled a variety of horse breeds from around the world and entered a mounted group.  It was very well received by the audience.  Authentic costumes to represent the breed and very professional grooming and presentation by all involved.

What a great way to showcase the Mangalarga Marchador in Portuguese show costume. Our entry won second place this year against many other horse-related entries.”

Photos are from the Horses of the World Parade with Laurie on Marchador Beethoven do Summerwind, August 2015