The last $250 award for the year (Sept 1 - Aug 31) went to Dana Johnsen in BC, Canada! Congratulations, Dana!
Dana received the award for planning and hosting Kate Barcelos, ABCCMM inspector and trainer for the first Canadian inspection. On August 15, 2015, Dana will host an event using the inspection and Kate to bring potential MM lovers to an arena where they can meet and learn about the breed. The grant will be applied for expenses in renting the facility to host the demonstrations.
This is the second promotional event for Dana this year. Here’s her write-up of her first competition with her mare. 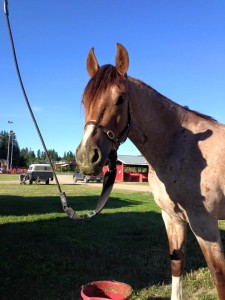 “Valentim Beijo and I attended the annual Interior Gaited horse show in Armstrong BC in June. Her presence was curiously anticipated by many of the attendees and organizers. We entered 10 classes and walked away with 8 ribbons including 1 first place, a few seconds and thirds and a couple fourth placings. This was uncharted territory for Valentime, as she had never been in a group of horses under saddle and never been inside an enclosed arena. After the her initial inclination to exit stage left, she listened to my calming cues well and carried on. She was the first Marchador to enter a show in B.C. There was lots of interest in her conformation and way of going, with many spectators questioning if she was indeed gaiting. This was accentuated by the fact she was sharing most classes with Peruvian pasos and Tennessee walking horses, who were obvious in their gaiting ways. (no photos available) After the show, Valentim received praise from many on her behaviour and cute looks!
With the intense hot weather we have been having her in the South Okanagan, one of my favourite things to do is take the horses to the lake for some reed grazing and cooling off. I have found that Marchadors really enjoy the water quite a bit. (photos attached)” 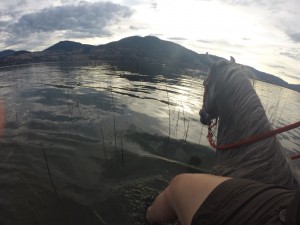 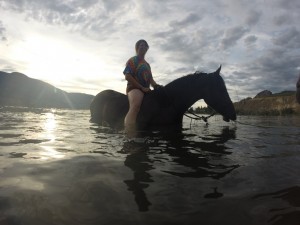 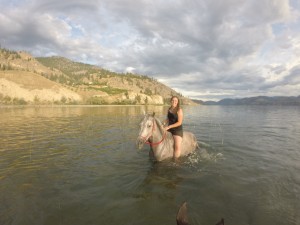 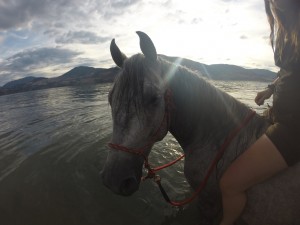