My name is Alessandra Deerinck, I own and operate HH Sensing, a horse training and horsemanship instruction operation out of San Marcos, California.

In 2010 I experienced what it is to ride a Mangalarga Marchador, and it has added to my professional life. Since then I have worked on bringing this breed of horses to attention anywhere I work and compete. Being accepted on the 2016 BOD of the USMMA is an honor, and I will do my best to cover the role of Secretary and to bring to life the MGM Ambassador Program.
I was not “born with horses”, in Milano, Italy. I “pulled” them in my life because I always felt drawn to them like a magnet is drawn to metal. I wanted to ride, since I was two, but my Dad asked me to wait until I was eleven. A few years later he also asked me to stop because he was concerned about the dangers of riding, but I could not obey him. Riding is my passion, and has become my job. At the age of sixteen, in order to keep riding I went to work at the racetrack, exercising horses before I went to school every morning. I also earned my license and rode and won in flat races. I value the time I spent at the racetrack as well as I am thankful to my parents for insisting I graduated from the School of Veterinary Medicine at the University of Milano. During that time I followed the work of Dr. Bassignana, a racetrack Veterinarian and Professor at the school of Veterinary Medicine in Pisa, worked at different farms to assist in the foaling season and did student internships in small and large animal surgery. For the same doctor I illustrated with drawings and edited his book about lameness in horses.

I competed in flat races between 1980 and 1992, until an accident ended my racing career. In 1992 I also met Charles Deerinck, and we got married two years later. In 2005 I attempted to get a racehorse trainer license in the US, and started to exercise racehorses, but I had another major fall in which I broke my back for the third time. Too often jockeys risk their lives riding, because not much care is taken about the racehorse’s proper schooling. Since then, changing this very wrong conception became important to me, and I am very aware of how fortunate I am, being able to ride again and not having permanent consequences from my accidents. Of the many racehorses that left their influence in me, one is very special. His name was Maslogarth, an ordinary racehorse that, just for being a "good boy", became the S Siro racetrack mascot, and earned himself lifetime room and board from this institution. Together we won and placed in several races, I was able to ride him bareback with a halter on the racetrack. On the ground, he walked at my side free of tack, even when we were between all the other horses. At that time I could not explain how I was able to work with him like that. It was spontaneous, and beautiful. Later in my life, when I met Carolyn Resnick, I understood a lot more of what I had experienced. Working with her inspired me to create HH Sensing, a new way relate to horses, based on liberty training, but rooted in the goals and nuances of classical dressage training, current horse behavioral sciences and my experience of forty years spent with horses. I have ridden in many different disciplines, trained many horses, and now, aside from being the mother of three children, I compete in any venue that is suitable for the horses I train. I believe in a comprehensive approach, and take care of any and every aspect of the horse, from managing their health and nurturing their mind, to trimming their hooves if barefoot, from training to competing if the owners would like to do so. The thrill of an endurance race is for me as exciting as teaching my horse to keep eyes and ears on me or to walk truly straight on a loose rein or to teach my skills to others.
Since the year 2009, first with Human to Horse, and now with HH Sensing, I have worked as a horsemanship clinician and horse trainer, between the US and Italy, my country of origin. I coded HH Sensing to be able to teach it online, and in traditional settings, like the clinics I have held annually for the last five years in Italy. I am a regular contributor in the training section for two different magazines, Il Mio Cavallo in Italy, and Elite Equestrian in Ocala Florida. In 2010 I translated, and got published in Italian, the book Naked Liberty, by Carolyn Resnick. Currently I am working on publishing it for her in an e-book form. During the same year I was invited to present at Cavalli a Milano, a worldwide equestrian trade show held in Italy. The same year, I presented my work at Equine Affaire in Pomona. 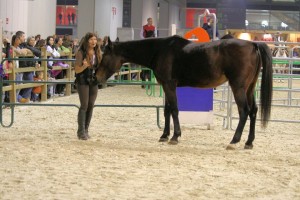 Presenting at Cavalli a Milano 2010

2010 was also the year I first rode a Mangalarga Marchador. The reason this happened was because I was searching for a very smooth horse for a client, and in my quest I called Jacob and Theresa at Rancho de Los Cielos. My client bought a Mangalarga Marchador from another breeder, but they asked me to go back and work with their horses. Rio de los Cielos was the first horse I worked with at Rancho de Los Cielos. I will always remember the very first moment, the two of us in the arena, no restraints of any kind. We were both standing still. His big eyes were asking me to start moving. I was hesitating because I did not know him at all. As soon as I stepped out, he moved with me like my shadow, even following me when I leaped in the air. When I went from working on the ground to riding Rio, I realized the reason why we all fall in love with Mangalarga Marchadors. Rio was very light, attentive, relaxed; he moved effortlessly at each gait. He always seemed to be asking me what I wanted to do. More than anything else, he was easy. I felt like I was with a friend.
The same year I recommended another student of mine in Italy to buy a Mangalarga Marchador, and after exploring together the horses available in Europe, he bought a mare from Max de Vroet in France. I also connected with the AIAMM (the Italian association of MM breeders) and with Domingos Lollobrigida in Brazil, while I was studying about the breed to better my ability to train and portray it in my articles. I have published numerous articles about Mangalarga Marchadores, in Italian and English magazines, and still cannot feel I exhausted what I have to say about them, because my daily experience continuously adds subjects, and improves my knowledge.

Riding Allegria de Los Cielos in the Swallow Day Parade in San Juan Capistrano, with the attire we will use for the Rose Parade 2016

I have worked with most of Rancho de Los Cielos horses using my HH Sensing approach, and have ridden almost all of them, but Allegria de los Cielos is my favorite. I introduced her to endurance in 2012 and now I have her in training; together we are bound to go to the Tournament of Roses Parade for 2016, because we competed in endurance and we are part of the AERC Parade Riders.
In the past ten months, with Allegria, I won the title of Champion mare 2014 in Las Vegas, participated in rail shows, trail competitions, cowboy challenges, endurance LD rides and I am training for another endurance ride in October.
I own two mares, a TB 14 y/o named Downtown Rosalie, that has been with me since 2006, and Aria de Los Cielos, my own Mangalarga Marchador out of Rio de Los Cielos and 1681 Marengo de Tosana. Aria was born in 2012 and is ready to start her training in the fall. I put a lot of care in the upbringing of this horse, to set up the conditions for having a great relationship and look forward to the near future. 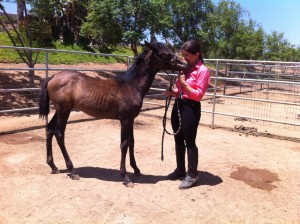 With Aria de Los Cielos as a foal. 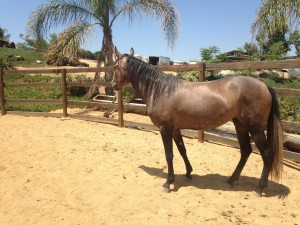