4 Seasons Marchadores, MT -- Lori Silcher and her Marchador stallion Baluarte Piry, submitted a video to become "America's Favorite Trail Horse".  The videos were submitted to the ACTHA where fans voted for their favorite.  Lori came in 2nd place, showing off the versatility of the Mangalarga Marchador and gaining many new fans!  Here's her video:

Flying Oaks Ranch, OK -- In February, Flying Oaks hired ranch manager Matt Brendal.  Matt's horse background is in Natural horsemanship and horseshoeing.   He is also a competitive participant in American Competitive Trail Horse Association (ACTHA) events.  Matt says this about the Marchadors: "I had never heard of Marchador horse before my contact with Rick. From my limited experience these horses seem very intelligent, sensitive and gentle. They are wonderful horses to work with and I look to forward to this opportunity to learn more about them."

Rancho de los Cielos, CA -- An article about the Marchador breed was written and published in Italy! by Alessandra Deerinck,  a new USMMA member purchasing a "de los Cielos" foal (Rio de los Cielos x 1681 Marengo da Tosana).  The article shows how Alessandra applied her methods to some of our horses. Video from those sessions will hopefully soon be available on You-Tube. Read more about Alessandra on her website, www.human2horse.com   We hope to translate the article and publish it soon.

Alessandra Deerink is a veterinarian trained in Italy whose experiences with horses include 12 years as a jockey racing Thoroughbreds, and greater than a decade in the U.S. re-fitting Thoroughbreds for life outside the race course, endurance riding, and promulgating the training discipline that has become her life work: Liberty riding and training.

The essence of Alessandra's, and her mentor, Carolyn Reznick's, training is the bond between rider and horse, based on the language of gesture and behavior that horses use among themselves. Alessandra and Carolyn believe one must develop companionship to have a true two-way conversation. Both begin developing a relationship when a horse is unconfined, when the horse can say "no" and go away.

Alessandra ascribes to theory and methodology originally described by Carolyn Resnick, author of Naked Liberty, and of a series of training videos, beginning with "Introduction to the Waterhole Rituals" that established her methods of creating a bond with horses based on her studies of wild horse behavior.  For over 25 years, Carolyn was a noted clinician, trainer, and Arabian horse breeder from her Sonoma California ranch, Stonehenge Arabians. She still provides clinics and individual teaching in her methods from her present ranch in Escondido, California, and she has played with a   Marchador she calls Marchador, since 2007, a white gelding imported by Susann Gabriel. Read more about Carolyn Resnick at her website at http://dancewithhorses.com 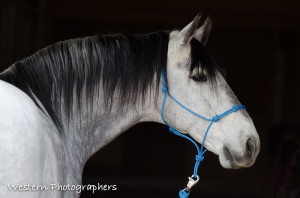 Koyote Libertas - from the photo shoot

SW Future Foal @ Summerwind, AZ  --  Laurie and Don Klassen from SK, Canada came down for a visit.  Laurie owns Beethoven do Summerwind.   Laurie picked up her 2011 SW Awards prize money and had a great time with Koyote Libertas, before she and Don drove on to Sedona!

The following weekend was a MM photo shoot with fun photographers Tamara Gooch and Jess Lee and St. Patrick's Day was our first ever ACTHA ride.  It's hard to believe that next month we'll be heading off for Colorado!