Reported to Aline Greene for the newsletter.

Great job to all members for getting out there with their Marchadors!   Who else wants to report in?

Laurie and Beethoven at the All Breed Show

Plus miles of endurance training , got to the timing of 24 miles in less than 5 hrs, with Erva -Doce and Aline, trying again in 2012! 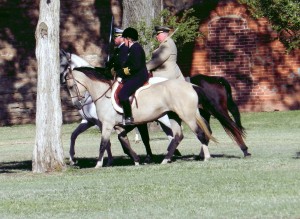 Sandy and I participated in the 2011 National Cavalry Competition and Bivouac in September. It was held at historic Fort Reno, just west of Oklahoma City, OK. Until its closure as an active Army post, it was one of three Remount Centers that provided many thousands of horses and mules to the Cavalry, Artillery, and Quartermaster branches. During WWII it was also a large Prisoner of War camp.

We enjoyed some success at this year’s Competition. Sandy placed 2nd of 18 in Level 3 (Novice) Military Horsemanship.  Bill  placed 3rd of 16 in Level 2 Military Horsemanship (Intermediate).  We also participated in other events, including Mounted Pistol and Mounted Saber, with less success but lots of fun. On Saturday we held a formal parade and ceremony. We mustered 70+ mounted soldiers and also had two artillery pieces from Ft. Sill, OK (about 120 south of Ft. Reno). We were very pleased that Andante and Amora stood quietly even for the firing of the 75mm gun!