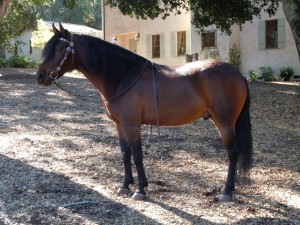 Imagine my excitement when Lori Silcher from 4 Seasons Marchadors drove up my driveway a couple of months ago with a darling Marchador gelding, just for me! Netuno Lapidade, a 10-year-old gelding calmly walked off the trailer as though he had been at my house his whole life!

Those of us who have Marchadors know their easy temperament is one of their enduring qualities. However, don’t assume that underneath that cool, tranquil exterior they are not experiencing stress. They just don’t show it. Let me share with you my experience with something I knew nothing about and NEVER in a million years would have put two and two together without the information I now have.

A few days after Lori’s trailer was long gone back to Montana, Netuno exhibited some uncharacteristic behavior. He acted cinchy when we tacked him up and even hunched his back as though he were cold backed or about to buck.

Now, I am the most cautious when tacking up, especially with a new horse. I had gone slowly with Netuno, with the cinch barely snug. Netuno showed cinchiness several times to varying degrees after that as well. (Sign number 1)

About a week after arriving here, Netuno starting cribbing! I freaked out and called Lori. She said he had cribbed when he first came to her place from Brazil. She had put a cribbing collar on him and, after a long time, he stopped wearing the collar, as he did not crib anymore. To her credit, she offered to take Netuno back, but it was too late, I was in love. So I bought a cribbing collar, and even though I never wanted a cribber, I wanted Netuno. (Sign number 2)

A couple of weeks later, my rider, Danielle, was riding and I noticed that Netuno looked off, almost lame -- not-so-much lameness, but stiff, and reluctant to move out. I even commented on it on the videos I took of him. He just did not look right, but it was subtle. (Sign number 3)

I mentioned this to my dressage trainer, Ellen Eckstein, whose husband is a well-known vet in Southern CA. We started talking about the sequence of events and I also mentioned that Lori had imported him and that he started cribbing after he arrived at her place. She asked me if I had ever checked him for ulcers.

Ulcers? What? Don’t those only happen to nervous, high-strung competition horses? I had NEVER even thought of that. And what in the world would the symptoms I was describing have to do with his stomach?

Enter my education. Here is what I have found out.

Vet research shows that 70% of all domesticated horses suffer from ulcers.  Not only in the stomach, but in the hindgut as well. Even the calmest horses can have them. Horses excrete stomach acid 24/7 (After all, they are grazers, as we know, meant to eat all the time).

The symptoms can be the strangest things, symptoms you would not necessarily associate with ulcers. Suddenly becoming cinchy, moving stiffly or not wanting to move freely, cribbing, pawing at feeding, not wanting to pick up a lead, teeth gnashing; we just assume these are behavioral, but not always. The reason for these odd symptoms is the excess stomach acid and if the horse has ever had ulcers in the past, they can flare up under new stresses and initiate a laceration. Think about it, tightening of the cinch is going to push the acid around the laceration. Movement… simply being asked to move out is going to slosh she excess acid over the laceration and hurt, so the horse sucks back and does not move as well! Cribbing can be a way for the horse to attempt to try and soothe the stomach. And yes, it does produce endorphins, so the habit sticks. There are of course, many more symptoms, but these were the ones Netuno showed me.

After calling my vet, it was determined that Netuno did indeed have ulcers. He most likely developed them during the trip to the States from Brazil when Lori imported him. When he moved to my place, he stressed from the move, though you could never know from his external behavior – he was calm as a cucumber, save for the few things I mentioned.

Just trailering a horse causes the abdominal muscles to contract and this can produce excess stomach acid. So even a ride down to the nearest trail can set it off. Another thing to think about!

Here is another example. A friend of mine just moved to Oregon. She had a very quiet Haflinger. She told me she was so thrilled that her horse seemed to be perfectly fine in his new environment. But after a few weeks, she called me to tell me he was eating his manure. I told her to give him a handful of flavored Tums a few times a day and see if he stopped. Lo and behold, he did! Poor guy was trying to soothe his stomach! So the move had stressed him after all.

Tums are a great way to “test” if you suspect your horse might have excess stomach acid. It is not a cure and you must always consult your vet! However, my vet told me about this test. He said the horses like the taste of flavored Tums and if you give them a handful a few times a day (as well as before you ride), and the symptoms seem to abate, you can suspect ulcers. But again, please always consult with your vet!

OK, lets say your horse has ulcers. If you have money to burn you can buy GastroGard or Ulcer Guard from your vet. This is the same company/product and the same dosage in a tube. It's just packaged and marketed under those two names. This is, however, the most expensive way to buy it. It contains 2.8 g of Omeprazole in each tube. It runs $35 per tube.

However, there are great sources of generic Omeprazole, which are much cheaper.  And Omeprazole is Omeprazole, no matter the source.

You can get Omeprazole in a powder from Precision Pharmacy.  Your vet can call them at (877) 734-3338 or Fax at (661) 377-3334 or www.myprecisionpharmacy.com. This comes with a 1.4 g scoop, so it would take two scoops for a full dose.  It is apple-flavored and can be added to the grain or mixed with Mylanta and syringed into the mouth.  Precision offers a very good price if you can get your vet to call them.   However, your vet may order it him/herself and add their cost to it. This is common.  You do need a prescription.  Maintenance would be 1/2 scoop per day.   You can also get a generic paste – again made by Precision Pharmacy with a vet's prescription.

You can get Omeprazole without a prescription in pill or granulated packets. The granules seem easier to add to your supplements.   http://www.equine.omeprazoledirect.com.  The Internet is an invaluable source, so get creative and use it!

There are also natural tummy soothers. The first is dried cabbage.  This is full of the amino acid, L-Glutamine, which is proven to heal the stomach lining.  You feed 1/2 cup of dried cabbage. I have just started Netuno on this and he loves it!  You can get the dried cabbage at www.harmonyhousefoods.com.

Another product that I plan on taking on trailer rides is a horse cookie made from organic sprouted seeds along with oat bran, micro-crystalized aloe juice, and cabbage, called Tum-Ease EQ.  It helps reduce the effect of stomach acid production on intestinal mucosa. They are in the form of treats, so they are very easy to administer.  You can either hand feed or add your horse's feed. You can get them at www.wholefoodforhorses.com

This all may sound complicated, but it is not. On the rare occasion that I have had acid indigestion myself, I know how unpleasant that can be. I cannot imagine living with burning acid in my stomach or gut and not complaining in some way about it! So be observant and aware of your horses, even our calm Marchadors!