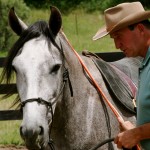 John Kelley with Artemis do Summerwind

It is hard to believe another summer is coming to a close. Lynn and I will be leaving Colorado shortly to return to Arizona for the winter. If any of you are in the Scottsdale area this winter, be sure to call and stop by.

You should be receiving an EMAIL from Tresa Smith about membership renewal.  For 2011, LIFETIME members and all paid 2011 members will receive a USMMA T-shirt with the new USMMA logo if you renew by year-end.

On a sad note, Lucas Guerra, founder of MM Horse Farms, and the first importer of Mangalarga Marchadors to the USA, recently passed away in August. Lynn and I were fortunate to have spent time with Mr. Guerra and his wonderful family both in Florida and in Brazil. The Guerra family hosted our first trip to Brazil during the 2002 Nationals.  We visited many farms, including the fazenda of Mario Lucio Borges, who was a fine breeder and a visionary for the Marchador breed.  We will always be grateful to Lucas Guerra for starting us on our wonderful journey with theMangalarga Marchador.  In his memory, I will be asking the USMMA Board to name our National Championship trophy after him.  I am hoping to have a National Show during my Presidency.

I have sent to all members a separate EMAIL which contains  the first in a series of articles Tresa Smith is organizing with all of the US farms that have imported Marchadors from Brazil. This first article was authored by Cristiana Guerra, Lucas's daughter, which focuses on their MM Horse Farms.  Tresa Smith and Lynn Kelley collaborate to edit and to add their contributions to the history as well in each chapter.

In the months ahead we plan to cover all of the farms that are responsible for bringing the Marchador to the USA. I hope you enjoy learning more about the specific breeding lines that are represented here.  Although the USMMA and the Marchador have a short history in North America. It represents a strong tie with the a rich Brazilian tradition.  I am very grateful that Tresa Smith has agreed to take the lead in documenting the importation and foundation stock of the USMMA.

To give you some perspective on this first article and future ones to come, here are some of the numbers to whet your appetite.

72 live Marchadors have been imported from Brasil (additional horses were imported in-utero).

The foundation horses represented a great mix of bloodlines.   Abaiba, Tabatinga, Favacho, Bela Cruz, Herdade, JB, Traituba, Caxambu and more. Some of the imported mares were pregnant to Brasilian stallions further adding to the genetic pool if their foals  remained breeding animals.    All of the other Marchadors found around the country are products of these original horses.