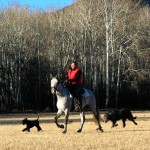 Tresa is an owner, breeder and importer of Mangalarga Marchadors in Montana. She discovered the breed while working in Brazil during the 1990s and decided to import horses to the US. She chose the Tabatinga bloodline as her speciality because of their hardiness and cow sense to work her ranch and Angus cows in Montana.

Lynn Kelley will stay on the board in the role of Registrar. The USMMA has registered more than 90% of the Marchadors born in the US. Horses registered in Brazil and imported to the US are automatically registered with the USMMA, with the submission of DNA.

The USMMA remains focused on introducing the Marchador across the country in the coming years. In 2007, Marchadors were registered in the new states of North Carolina and South Carolina and a new country, Canada. For further expansion and improved genetic diversity, the Kelleys are working with the ABCCMM (the Brazilian association with over 200,000 registered horses) to import frozen semen and frozen embryos to the U.S.