The trademark Horseshoe M Brand of the Mangalarga Marchador owned by the ABCCMM.

The Inspection and Open House in BC, Canada.

Kate measuring Valentim during inspection with Dana holding her.

Flying Oaks Valentim-Beijo with Kate Barcelos on the left and Dana Johnsen owner on the right. 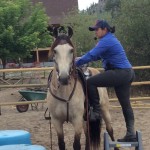 Kate mounting Sapphire (sp) and Barcelos, ABCCMM at the BC event. Owned by Gena Rome.

Flying Oaks Athena and owner/rider Sandy Dory at the BC event.

Igor do Lucero coming in with owner Bill Dory.

Great to have so many Marchador horses and owners come together!

Tory, MM gelding, and owner/rider Sandy Dory at the BC event. Photo by Shannon Ford.

All photos at the BC event by Shannon Ford, published on FACEBOOK.

Dr. Kate Barcelos was in Canada presenting her paper at an Equine Conference and stayed on to complete another ABCCMM inspection, the second one in Canada!

Dana Johnsen, USMMA Board Member at Large, organized an Open House around the event and Marchadors from Alberta and British Columbia joined in! Additional invitations and participation from people who wanted to see, meet and ride a Marchador. It looked like a great event.

ABCCMM inspection is a prerequisite for dual ABCCMM (Brazilian) registration. It is not required for USMMA registration.